Lake Garda or Lago Di Garda has charmed poets, musicians and other artists towards its way for centuries. Renowned poet Alfred Lord Tennyson’s poem Frater Ave Atque Vale which he had written as he mourned the death of his brother was inspired from this very lake. The lake has also inspired other renowned names like Catullus and Dante. In today’s time however, the place is also quite famous for adventure sports such as mountain biking and parasailing. 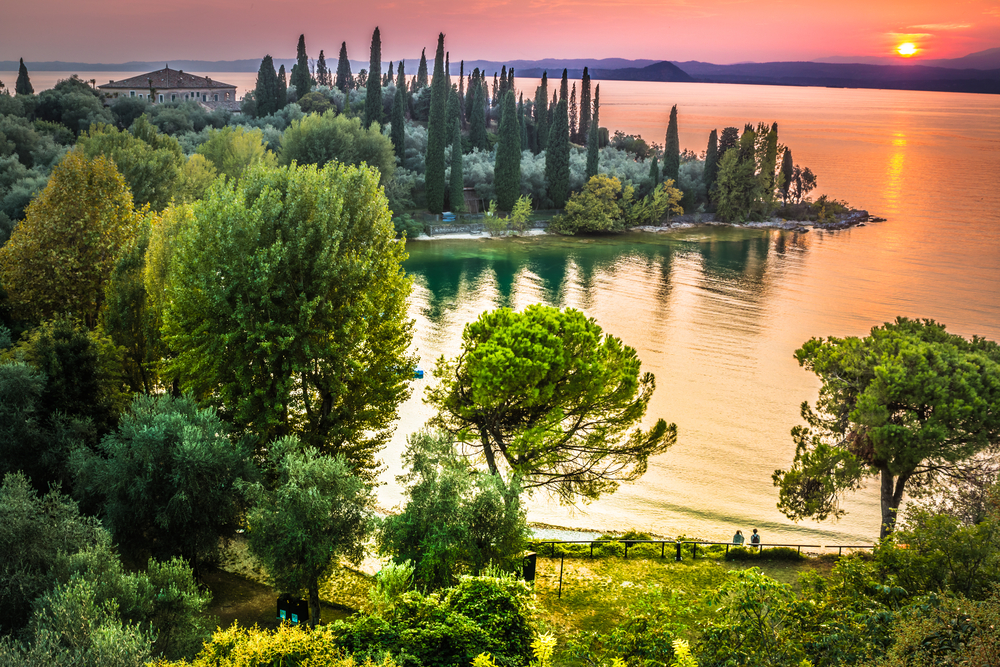 Lake Garda is the largest lake in Italy and was formed from the glaciers, towards the end of the last Ice age. It is situated in the north-eastern part of the country about halfway between Brescia and Verona, and between Venezia and Milano, dividing the regions of Lombardy, Veneto and Trentino Alto-Adige. The northern part of the lake is tapering like the tip of a sword and is surrounded by mountains and cliffs while the southern end is low and rather evenly built. The mild and windy climate of the area is hospitable and makes for a perfect getaway destination. The area is pretty well connected by air, water and road. Taking the bus is ideal for travellers who want to explore the towns and enjoy the culture of the lake. 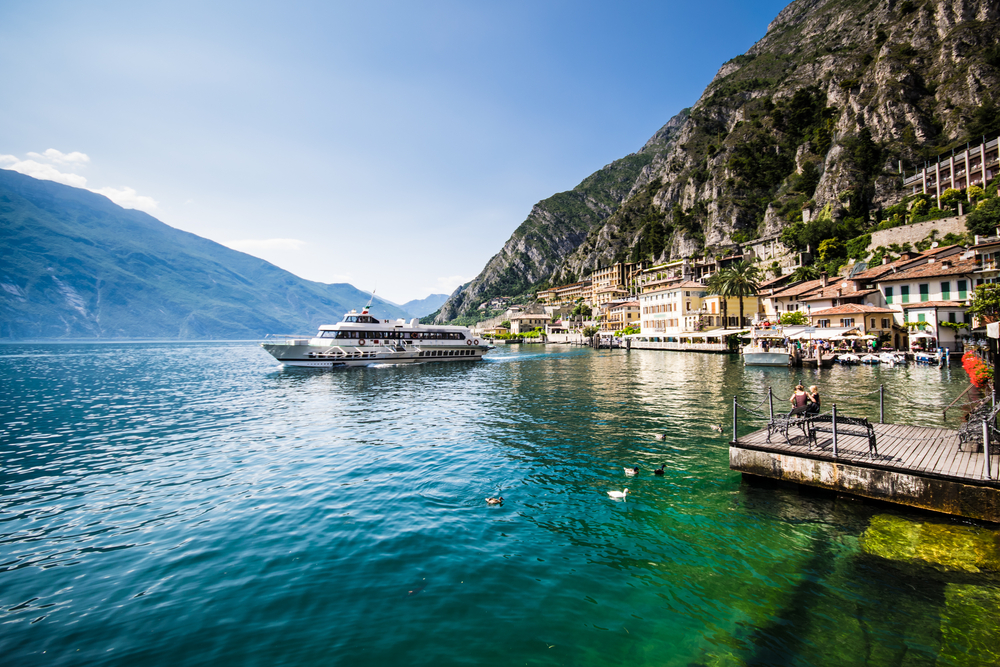 The beauty and the charm of this lake are often overshadowed by that of Lake Como with its medieval architecture, villas and beautiful gardens. However, Lake Garda is better known for its modern towns, picturesque views and charming villages that seem to be stuck in time. This is the kind of place where you can expect the best of both worlds - peace and quiet on one side and an active nightlife on the other. Besides these, there are a number of attractions catered towards kids and families, one of which include Lake Garda’s very own themed amusement park Gardaland.

Sirmione is located at the tip of the highland and is known for its medieval buildings, cobbled streets and historic castles. The most famous building in Sirmione is the Grotte di Catullo which is the Roman villa of the Catullus family. The villa is filled with olive groves and purple flowers, honey coloured stones and triple arched windows. One can take the toy train which travels from the heart of the town up the slope to the villa as it takes you around town.

Besides the Roman and medieval charm, this small town sets the mood for a perfect getaway with its waterfront cafes with magnificent views of the lake. The iconic local ice-cream and the hot springs in the area are a must try too. The town also has a long and narrow beach where you can enjoy the calm waters of the lake. 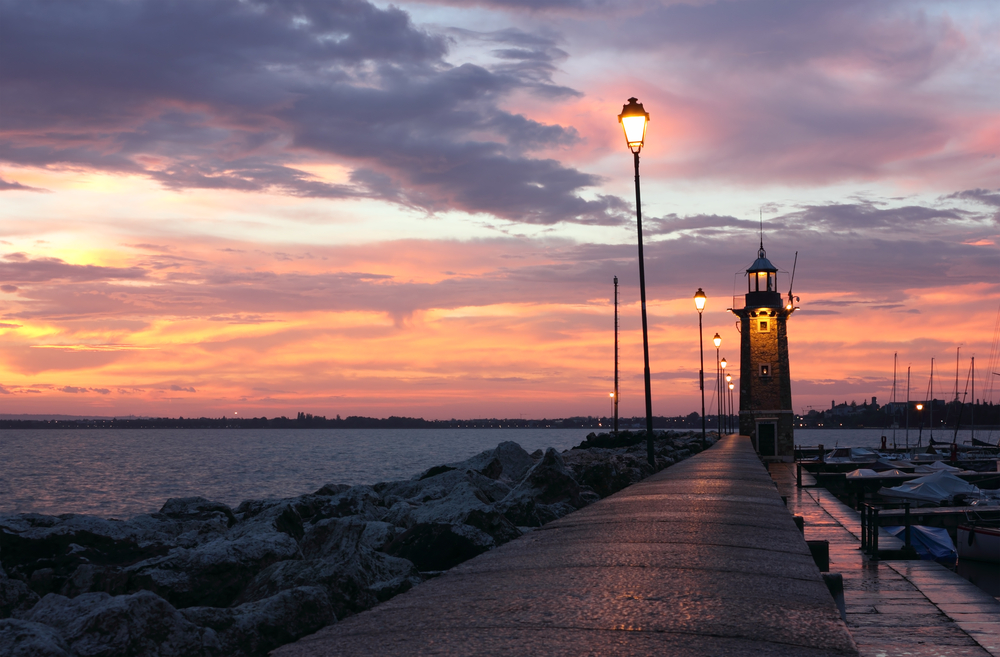 Desenzano del Garda is located on the southern shore of the lake. The small town has some historic streets which lead up to the castle (Castello di Desenzano) on top of the hill. Desenzano is well connected by train to most parts of Italy and is nearest to the airport. You can take a ferry/boat ride from here to tour the lake and visit the small nearby towns. This town is relatively modern in comparison to the other towns of Lake Garda. You can find a number of restaurants and bars here. However, you can still find the old world charm as you walk down the streets and visit the medieval castle the Castello di Desenzano which also sports a beautiful view of the lake. The Duomo Di Santa Maria Maddalena is the town’s crown jewel and will transport you back to the Renaissance era. Desenzano is the ideal place for someone who would want to explore the culture of Italy at its best. The harbour of Desenzano is a must see.

Riva is located towards the northern end of the lake and is known for its public gardens by the waterfront which are perfect for relaxing and unwinding after a long week. There is an abundance of markets and shops towards the centre of the town while the waterfront is crowded with quaint cafes, restaurants and bars. The Rocca castle, which was one of Garda’s fortresses is located on the waterfront and also houses the town’s museum. The northern part of the lake is famous for diving and walking excursions and contains some of the region’s iconic attractions. These attractions include the Bronze age remains at Lake Ledro the remains of Castello d'Arco. Another major attraction in this area is a 287 ft. waterfall at Varone.

On the western shore is the small town of Gardone Riviera and attracts tourists for its location and stunning views of the lake. Besides a view, the town is also known for a little piazza sloping down to the lakeshore and a peaceful lakeside promenade decorated with well-kept flowerbeds. The town also has two of Lake Garda's most iconic attractions namely Gabriele d'Annunzio's eccentric home and the tropical Andre Heller Botanic Garden.

Gabriele d’Annunzio’s eccentric home Vittoriale degli Italiani is a national monument which also houses a war museum that contains a MAS fast military ship and the plane on which D'Annunzio raided Vienna. The Andre Heller Botanic Garden is situated slightly uphill from the waterfront and is also known as the Giardino Hruska Botanico (as named after its founder). The interesting part about this garden is that you can find works of modern art dotted among the plants, pools and streams.